A digital graphic recorder reviews: How does the new iPad Pro 2018 feel?

Hi, I’m Linda, 41, and I am an iPad user. So I’m not six but I still enjoy using my iPad. Greetings thus to Microsoft and their latest holiday ad where they go to attack towards the iPad.

Already in the first chapter I used the word “enjoy” to describe how it feels to use the iPad. Generally speaking it is so: most of the times the new iPad Pro is enjoyable. I won’t write a list about its technical details – those can be checked out on the Apple website – but I just tell that it’s effective and fast but at times it makes me furious. Let me explain why. 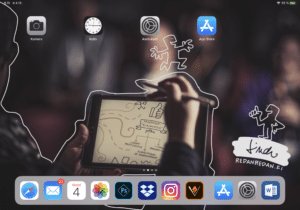 When you open up the iPad for the first time, you get surprised by the screen. It’s pretty awesome as it stretches from one edge to another with its full power and beauty: vibrant and rich colors and ProMotion technology make everything seem quite gorgeous.

BUT. There’s a but. The all-screen design makes it difficult to use the face-ID. Apple says it doesn’t matter which way you use the iPad but it does. At first I didn’t know which way I held the iPad so the camera was all the time behind either my left hand or my right hand.

Also from the live-sketchnoter’s point of view the screen direction matters. When I use the iPad with Adobe Draw, it matters which way the device is. If it is the other way around, it also rotates the drawing upside-down. You can’t flip all the layers at once so what to do? Merge the layers and then flip the drawing back to it’s original way. 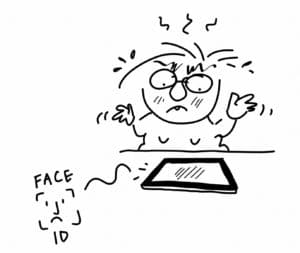 The face-ID itself might be ok – what do I know about technology? – but it suffers from the all-screen approach. As said earlier, the hand gets in the way. And it doesn’t matter if you’re a left-handed person; it still gets in the way. (I’m right-handed myself.) It tries out the face-ID a couple of times and then asks for your access code. Now, as a live-sketchnoter I’m often hooked up on a projector. If I punch in my access code, everybody in the seminar hall sees it. Instead, one needs to move the hands away and goggle the iPad like a maniac to give it time and space to recognize your face. Handy, huh?

However, there’s a quick solution to the orientation problem. I was going to buy a matte screen cover anyway to shield the screen and to give me extra friction. As I put the shield on I noticed that there’s a little space for the camera. Now I have some kind of marking telling me which way to hold the iPad.

The new iPad Pro screen feels a bit slippery. I have a feeling that the older iPad Pro was even more slippery. 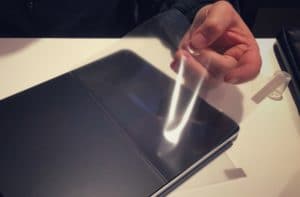 With slippery I mean that the Apple Pencil glides on the surface too easily. What does this mean to drawing? It feels weird and it takes away some of the accuracy. Especially moving from paper to iPad that causes trouble. But there’s a way: you get that lovely friction by using a plastic, matte screen protector. I actually read about these protectors some time ago in Mike Rohde’s posts – thanks for the tip, Mike – as I struggled with the clicking sound that my first Apple Pencil caused when it hit the screen. I’ve tested out both Illumishield protectors and the ones from PaperLike and they both work nicely.

Is it a problem that the new iPad pro doesn’t have the home button? To my mind: no. I use a newer Apple phone that doesn’t have the button either so I’m used to not having it anymore. However I noticed that the missing button caused a hiccup in my drawing process: I was so used to double-clicking during the illustration process that at first my hands didn’t kind of know what do do if I wanted to jump from Adobe Draw to image roll. (I normally have my guidelines for the job in the image roll while I work with Adobe Draw. I don’t use the shared screen. Instead, I just change between apps quickly to take a look at the instructions.) But I guess I’ll get used to that.

It’s good once you learn how to pair it with the device. Light. Magnet works. Accurate. Good to draw with. Recommended.

Everything changes with the new iPad when it comes to dongles. They took away the lightning cable and moved to USB type C.

They also took away the headphone jack. As a real-time live-sketchnoter this caused me some trouble in my first real-time gig as I hadn’t prepared with a proper set of dongles. But now I have both the VGA and HDMI adapters that are suitable for the USB type C. I also bought a 2-meter log charger cable. Power sockets aren’t always right next to you in seminar halls so you need a longer cable.

All in all the new iPad Pro feels pretty familiar. There was some talk about the new Bendgate because of a YouTube video. I don’t have the intention to bend and crack my device any time soon but the screen does feel a little bit softer than in the previous iPad Pro. Or maybe I press my pen too much, who knows? The chassis fees ok and sturdy, I think.

Whenever I tell about the features the iPad has someone usually makes a comment about Microsoft’s Surface Pro or asks if I have tried it. Last time I had a Microsoft Product was in the afterquake of Nokia downfall when I had a Lumia phone. I didn’t like using it then. At all. However, it would be interesting to test out the newest Surface Pro but then again: Adobe hasn’t published my favourite app, Adobe Illustrator Draw, to Surface Pro. Let’s see if the bring the new Project Gemini into Microsoft ecosystem, too. But I do like drawing with an iPad and as I told in my previous post, iPad was the device that made me into an illustrator. A real-time live illustrator, that is. 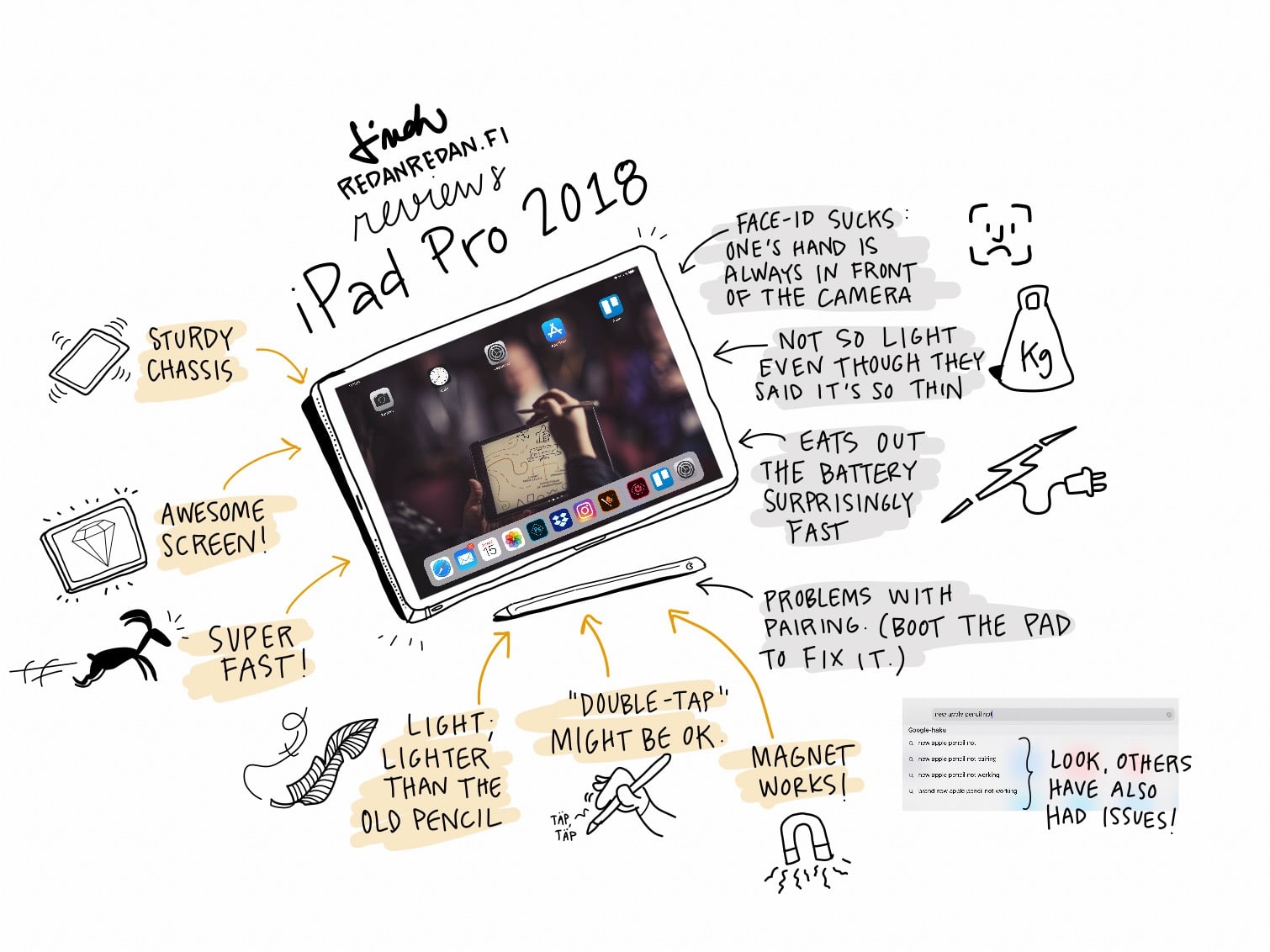 Written by
Linda Saukko-Rauta
Entrepreneur and a digital graphic recorder since… 2010? 2011?

Finnish version of the post here.  I became an iPad user in 2010.

Last summer I gave a workshop on digital visual practitioning at the EuViz Conference together with my Finnish colleague Raquel. Now Raquel continued the saga by giving The Thriving Digital Visual Practitioner workshop in Copenhagen.